A Feminine Lexicon is an online exhibition curated by Pia Diamandis and Elena Tortelli, undergraduate students in Arts Curating in 2021-2022 at Istituto Marangoni Firenze for Museo Salvatore Ferragamo.
The curatorial project A Feminine Lexicon took inspiration from Women in Balance, an exhibition curated by Stefania Ricci and Elvira Valleri that will open at Museo Salvatore Ferragamo on May 20th.
Where Women in Balance celebrates the history of Italian women during the economic boom, a historical moment of rapid changes for women’s role in society, A Feminine Lexicon will continue the conversation of what is considered feminine today through the works of eleven international contemporary artists.

The A Feminine Lexicon project results from a dialogue between the museum dedicated to fashion and art and the school of art and fashion. The project stems from a proposal made by Museo Salvatore Ferragamo to invite Arts Curating students at Istituto Marangoni Firenze to imagine a contemporary response to Women in Balance, the 2022 exhibition curated by Stefania Ricci and Elvira Valleri, focusing on women’s role during the economic boom in Italy. They searched for a challenging balance between the traditional model of femininity and a newer identity in their private and public life, within the family and at work.
The urgency of these themes, still relevant today, has allowed the Arts Curating students to create a new curatorial reflection, parallel to the exhibition held at Palazzo Spini Feroni from May 20th, to continue to observe the changes around female identity in the present.
The online exhibition A Feminine Lexicon gathers artworks from eleven international contemporary feminine artists to start a collective conversation on language and identity.

“What was really interesting about A Feminine Lexicon,” explains co-curator Elena Tortelli, “was the possibility of exploring the perspectives of different creative minds. The eleven feminine artists, with their different personalities, cultures and backgrounds, made a wide discourse around the topic of femininity. The explanations of the artworks come directly from the artists’ words and voices. And this opportunity to hear their perspective is what makes a difference in the exhibition experience.”
By uniting different identities and individual stories within the same curatorial framework, A Feminine Lexicon is ultimately an attempt to create a transnational, heterogeneous lexicon, incomplete but capable of recognising multiple facets of contemporary female identity.

As co-curator Pia Diamandis affirms, “this has been a gratifying experience early in my career, to learn hands-on what it takes to create an intersectional space, meaning a space that recognises the variety of experiences from different feminine identities and backgrounds. A wider public could perceive A Feminine Lexicon as a space that affirms the notion of womanhood, including everyone who identifies as one, to proudly embrace trans identities, indigenous identities, differently-abled identities, and so much more.”

Monia Ben Hamouda (b. 1991, Milan, Italy) is a visual artist. She lives and works between al-Qayrawan and Milan.

Stacey Gillian Abe (b. 1990, Kampala, Uganda) is a visual artist. She lives and works in Kampala.

Helena Hladilová (b. 1983, Kroměříž, The Czech Republic) is a visual artist. She lives and works in Tuscany, Italy.

ChongYan Liu (b. 1995, Guizhou, China) is a visual artist and filmmaker. She lives and works in Paris, France.

Haruka Sakaguchi (b. 1990, Osaka, Japan) is a documentary photographer. She lives and works in New York City, USA.

Griselda San Martin (b. 1978, Barcelona, Spain) is a documentary photographer. She lives and works in New York City, USA.

Johanna Toruño (b. 1989, San Salvador, El Salvador) is the visual artist behind The Unapologetic Street Series. She lives and works in Los Angeles, USA.

Alice Visentin (b. 1993, Ciriè, Turin, Italy) is a visual artist. She lives and works in Turin, Italy.

A Feminine Lexicon is an online exhibition curated by Pia Diamandis and Elena Tortelli, students in Arts Curating at Istituto Marangoni Firenze for Museo Salvatore Ferragamo. It will be available starting on May 20th at museo.ferragamo.com. 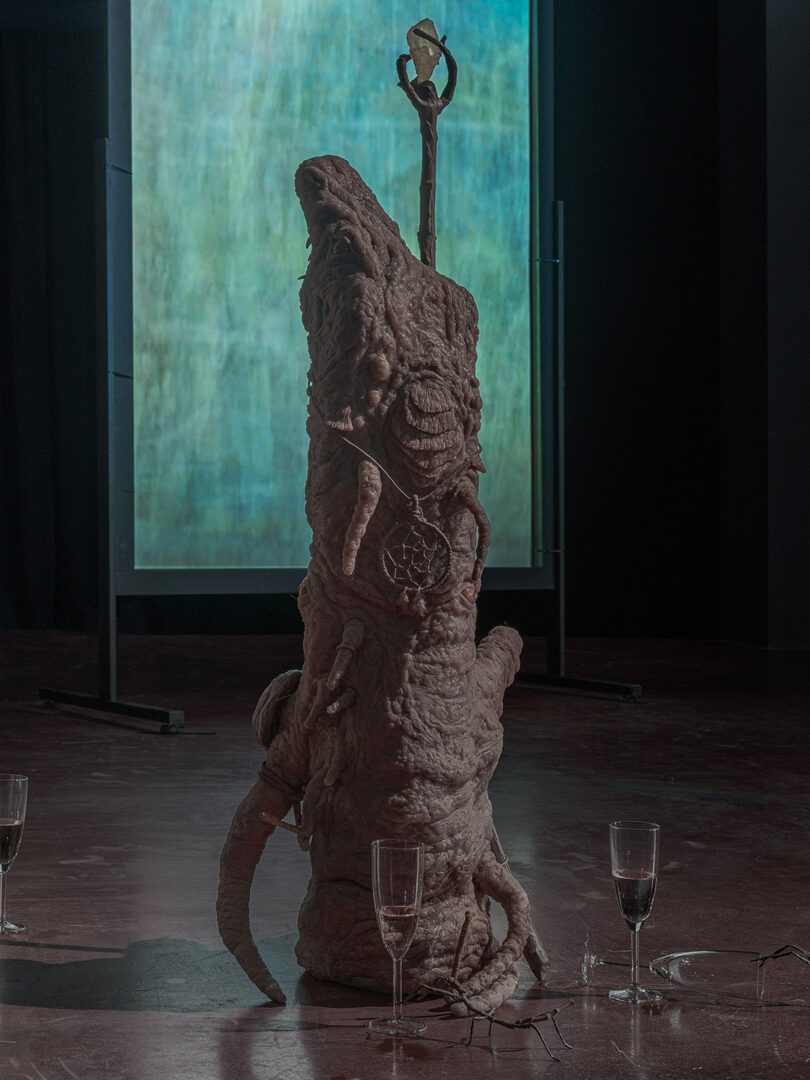 In the dim location of Manifattura Tabacchi, a diverse variety of imaginary beings are looking at pale images projected onto wide screens as the public silently walks by. These alien beholders repeat the practice mentioned by John Berger in his The Ways of Seeing: the creatures watch themselves being looked at. At the opening of the […]