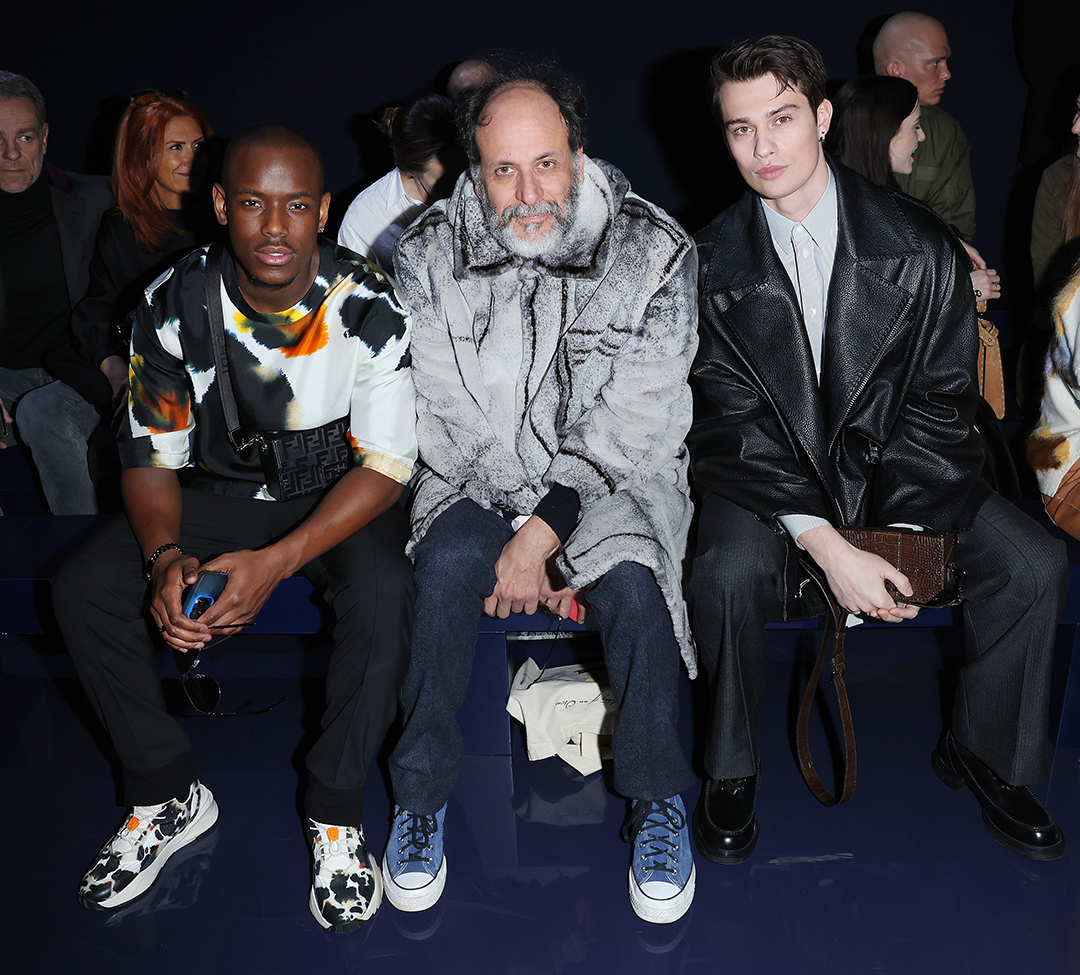 On the second day of the Milan Fashion Week, FENDI invited around thirty students from Istituto Marangoni Firenze to attend their menswear fashion show. For many, the event’s first in-person runway was the direct confirmation that fashion is where they see themselves in the future.

On the second week of January, Milan had already warmed up the engines for its trademark event: Fashion Week. Having collaborated with Istituto Marangoni Firenze for a sustainability project, FENDI invited a select group of students from Istituto Marangoni Firenze to join the Fall-Winter 2023-2024 Menswear show.
The result is a reportage unfolding the impressions that I, an art curating student striving to get into fashion journalism, had about this first experience.

Attending a fashion show for the first time is an experience packed with a constant feeling of estrangement from reality.
The anxiety-filled moment of queuing in front of the runway’s venue creates the expectation that one will witness an otherworldly experience. While shakingly reading the invitation for the umpteenth time, you’re touched by the attendees’ superb glares, making you feel like an impostor among the privileged.

Apart from the sense of immediate inadequateness, a mixture of excitement and anxiety is felt right in the stomach, increasing the event’s aura. For half an hour, you’ll be part of what is pop-culturally represented as a sugar-coated world of frills and fringes that traditionally manifests itself in all its majesty two seasons a year. For a student, it’s a fanciful occasion in which an aspiring insider has the unbelievable luck to partake.

All the insecurities intrinsically present in fashion start to fade the instant you realise that this incredible machine called fashion is actually made of people. Contrary to the sector’s hushed depiction, very few attendees were there to enjoy themselves. Every person had to contribute to giving life to a memorable moment.

Posing in front of a screen with a blue background and the enormous metallic double-F logo, influencers and special guests – from Stranger Things actor Caleb McLaughlin to the acclaimed director Luca Guadagnino – showcased their looks from recent collections.
As you might expect, an extensive array of Baguettes and Peekaboos were all over the place, confirming themselves as an accredited piece of the trendiest men’s wardrobes.

Every step inside the venue came with constant gawping at the outfits and the influential fashion system personalities there.
As an aspiring fashion journalist, seeing in person that mythical bestiary of faces familiar only thanks to social media inevitably caused a pleasing sensation of alienation and a subtle encouragement for the future: one day, I will be one of them.

SEATS FIGHTS, FRINGES AND ENDINGS THAT SHOULD NEVER ARRIVE

The late-comers struggling to find their seats in the gloom and elegantly-delivered fights for the best spot were accompanied by chit-chats on the show that came before it. Then it was complete darkness and silence before the music and the show began.
A riot of fluid cashmere coats, white sprayed shearlings, and Shetland wool fringes in tones of mauve, blue, moka and beige, accompanied by silver and sparkly details, crossed over the runway over the notes of After Dark, the soundtrack by the legendary Italian composer and producer Giorgio Moroder.

Transforming established womenswear’s features into genderless items was an elegantly-delivered operation that enriched the FENDI menswear show through sexy asymmetrical cuts, impalpable knitwear, delicate tones and dandy-like layering.
After the finale, Silvia Venturini Fendi – Artistic Director of Accessories and Menswear for Maison FENDI – appeared to thank the attendees, generating a smartphone craze in the audience that fast disappeared for the next event. Being the venue almost empty, I stayed there like when a party’s over and the melancholy of things ending starts to build. In those moments, when you stop your body and let the mind drift, the bittersweet taste of just-experienced things is painfully pleasant to savour.

I still had butterflies from the show as I walked to the Sant’Agostino underground station. While waiting for the train to reach the city centre, I noticed right behind me a couple of models seen on FENDI’s runway a few minutes before, giggling at their backstage photos and still wearing bold lavender eye makeup.
I am not superstitious and believe that you build your success through hard work; still, at that moment, plunged in gratitude for the just-concluded runway show, I decided to interpret the models’ presence as an encouraging epiphany for my working future.
That day, dreams seemed a little bit closer.

On the opening of the new FENDI Factory outside of Florence, during the event of Les Journées Particulières, an interdisciplinary group of alumni and students from different areas of Istituto Marangoni Firenze will showcase the result of Dis-cycling: the seductive allure of creativity in sustainability, a project under the mentorship of artist and I’M Mentor […] 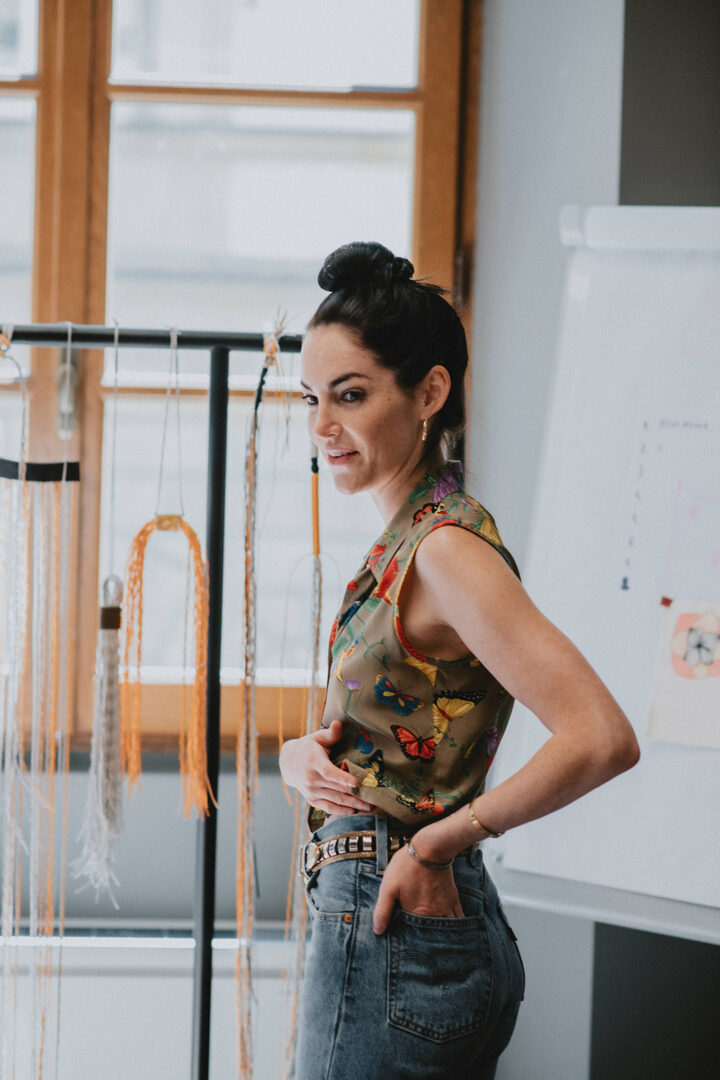 Dis-cycling and Circular Creativity: Bootcamp with Sarah Coleman and FENDI

Four days of intensive experimentation at school, a visual artist from New York supporting the students, and luxury materials supplied by one of the world’s most renowned Italian fashion brands.These are the three ingredients to the success of the project DIS-CYCLING • The seductive allure of creativity in sustainability, which brings together the mentorship of […]