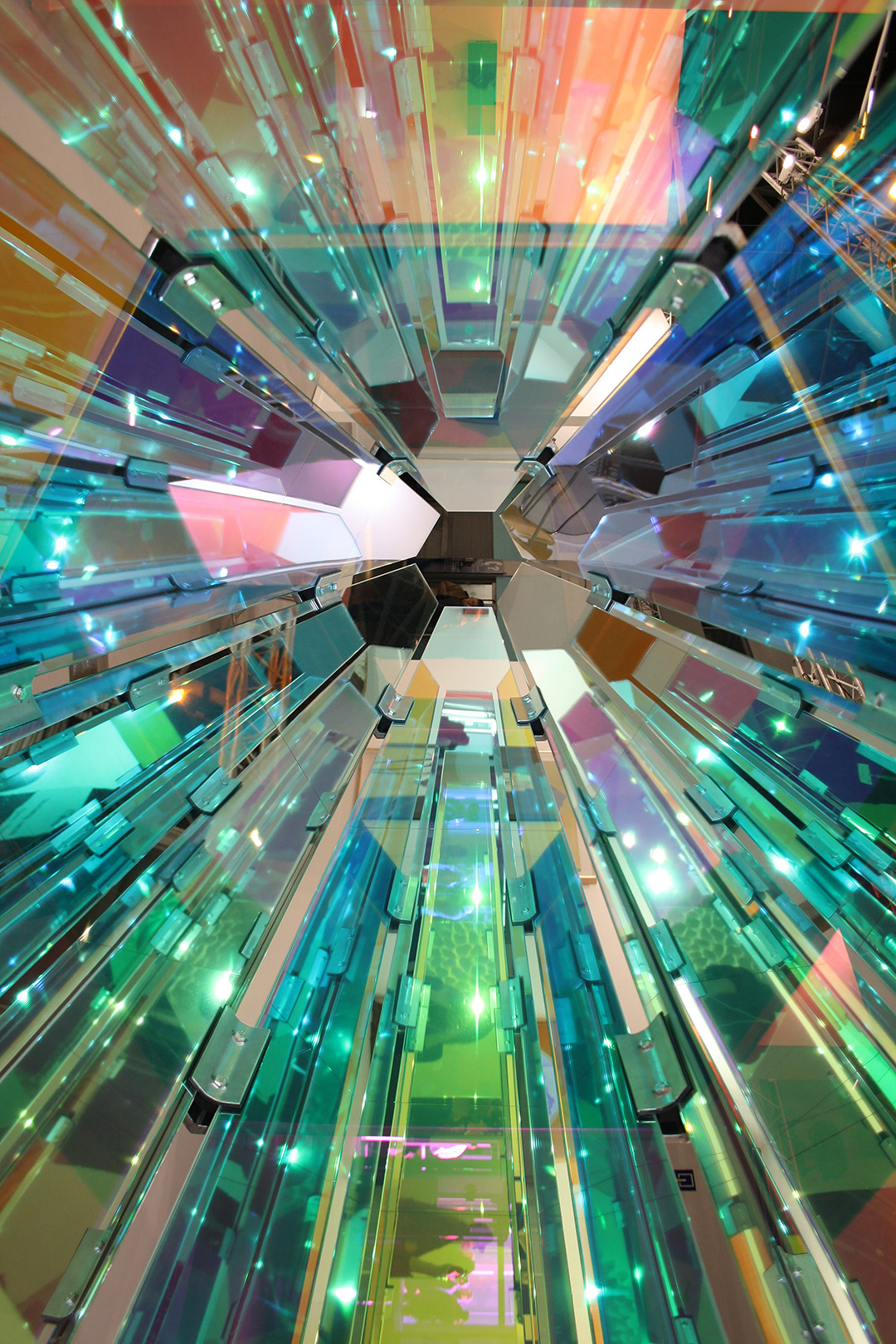 Nel Tuo Tempo is the latest solo show by the Berlin-based artist Olafur Eliasson, curated by Arturo Galansino at Palazzo Strozzi in Florence. With the assistance of natural elements such as water and light combined with everyday objects, including windows and mirrors, viewers’ perceptions are sublimated in a poetic, unpretentious way.
The visitors are encouraged to experience every room and installation through their senses. And this is what happened to the article’s writer while visiting the main floor of the exhibition.

FAMILIAR ALTERATIONS
When I was little, my mum gifted me a kaleidoscope. I used to keep it inside a drawer among the kitchen tools and stare at its little universe of colours during moments of boredom.
It was a kaleidoscope unique in its kind. On the opposite side of the ocular lens was a perpendicular circular hole. It was necessary to insert a glass tube filled with water, sand and glitters: a vividly coloured hourglass.
The tube could be rotated, and that rearrangement of liquids and solids made the tiny elements relocate inside the shiny water, which was pure pleasure for my eyes. In those moments, the world appeared as colourful as never before: I was craving to get inside that illusory dimension and jump from one facet to another.
While I was gaping at the books’ titles in the bookshop after the visit to Olafur Eliasson’s exhibition in Palazzo Strozzi, I glimpsed a light-coloured box containing a bunch of kaleidoscopes. Very simple in their shape, and without the option to rotate any of their parts, they directly overlooked the space around them. At that moment, the meaning of what I had just seen on display instantly became clear: the prismatic world we look for so we can dream is just in front of us.

ILLUSORY REFLECTIONS
After walking up the stairs to reach the piano nobile of Palazzo Strozzi, I arrive in the first room, apparently empty. I look around and spot something on the left wall: a window multiplied in its measurements. But I don’t see the window: I’m gazing at its shadow, its ghostly presence that holds the title of Triple seeing survey (2022). The projection shows the glass’s peculiarities that compose the casement’s squares through wall-mounted spotlights. We could call them imperfections, but after a quick overview, you can admire the appealing modernity of their almost abstract lines: an unexpected feature that emerges from their glorious artisanal past.
These artworks, alongside Tomorrow and Just before now (2022), are the first ones that welcome visitors inside Palazzo Strozzi. They were specifically created for the exhibition Nel Tuo Tempo and planned to be framed by the walls of the Tornabuoni cultural space.
Artificially projected rays that vary from a neutral hue, contemplating the twilight colours and reaching contrasting artificial tones, transform bits of the venue into the main focus of these works.
Essential and effortless in their representation, these light-based installations recreate the effect of Gothic stained-glass windows inside Palazzo Strozzi.
Windows and lighting, prosaic and ethereal: both contribute to resignifying the relationship between the ancient venue and the contemporary artworks inside. It was a new approach to creativity and display for the Danish artist Olafur Eliasson.

NOT JUST MOLECULES
After this luminous introduction, the following rooms could be considered a unique attempt to reshape the space using mainly two elements: our presence and mirrors.
Most representative in this category is the art piece Solar compression (2016), consisting of yellow-saturated mono-frequency lamps installed between two mirrors.

Their light, whose rays fill the sixth room in its entirety, has the unique feature of manipulating our perception of colours, pushing our eyes to see the world in hues of black, white, and the lam’s main tint, yellow in this case.
Beholders can acknowledge this phenomenon by looking at themselves in the reflective surfaces that float in the middle of the room, spinning around themselves in a calming rhythm.

Through this invitation to interact with the space around them, visitors are guided to resonate upon an elementary yet mesmerising fact: our simple existence actively affects the world around us. We produce alterations in our environment not only by moving molecules but also thanks to the reflections that things have upon us (physically and metaphorically) and the shadows we cast on the objects we encounter.
Because of us, single individuals and collective human beings, everything gets a new meaning; our unique, spontaneous action in the space around us opens our reality to a new poetic opportunity.

LAST BITS
The last rooms of the exhibition stand out for their immersive quality. For example, Beauty (1993), a spectacle of water particles, unveils a sublime experience that focuses on the transience of things and our ability to see the world in alternative ways.

The mist on which a rainbow is projected contributes to creating an ever-changing aerial sculpture; observed from different angles, it can generate radically different visions and perceptions in the eyes and mind of the viewer.
This feeling is more generally beheld in the mixture of tangible, unpalatable and abstract elements that Olafur Eliasson masterfully displayed,
adopting an honest lyricism: delicacy at its finest.

After all these aspects, it is evident that the kaleidoscopes in the bookshop are not the just pocket-sized version of the Color spectrum kaleidoscope (2003) – a sculpture in the tenth room of the exhibition, which colourfully alters the reality filtering from the narrower of its two openings – but they physically express the meaning of the entire show.

Sometimes we don’t require an optical ploy to see the magic inside our reality. After all, everything we need is our presence, some light (preferably the one everyone has inside) and the fearless desire to be amazed by everyday life like a child again.

Giulia Piceni is an Undergraduate student in Arts Curating at Istituto Marangoni Firenze.