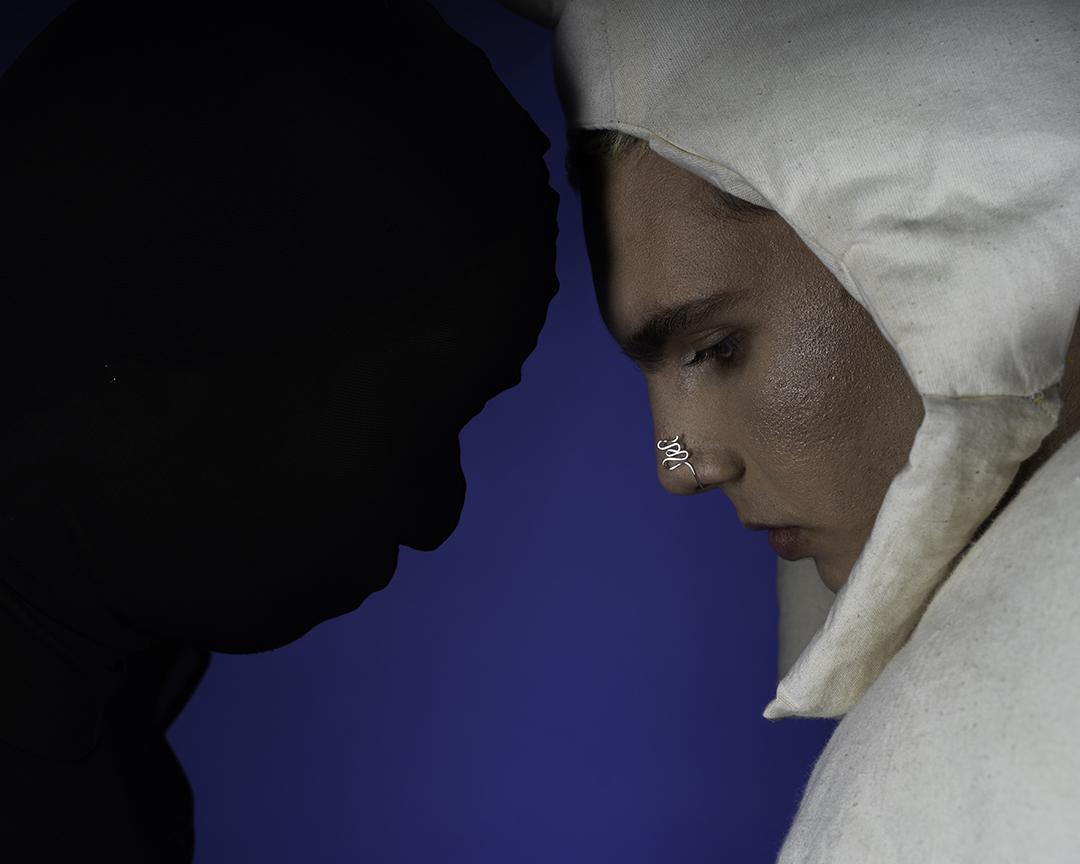 A new glimpse into the visual research of Istituto Marangoni Firenze students, an Arts Curating student analyses a recent photoshoot by a Fashion Styling student to create rich storytelling between art and fashion, from Giotto to Balenciaga.

Black and white contrasts, a mask and sense of anonymity: could this be more Maison Margiela than this? Conceived by the talented Macarena Arìas Silva Del Pozo, AZUL is part of a triptych of shootings holding the names of BLANCO and NEGRO.
For the Fashion Styling student Macarena Arìas Silva Del Pozo, “Azul” – light blue in Spanish – is the meeting point of the antipodal shades of black and white. An immaterial setting where these colours converge, highlighting the necessity of obscurity for light to exist.
An urgency of being together connects these opposing forces. Their meeting point is right in the middle, in the dense, hypnotic shade that gave the title to the photoshoot.
Plunged in a vivid light-blue background, two people dressed singly from head to toe in black and white occupy the space in a motionless, contemplative way.

The contrast between colours is emphasised in a closeup where the two people face each other but paradoxically without making eye contact.
The black-dressed person on the left is wearing a mask that hides the model’s gaze, leaving no room for interaction and making it look like a muted 2D surface. On the other side, a white-dressed model provides contrast in terms of colour luminosity and texture, showcasing many skin and garment details left untouched by postproduction.

The multilayered dualism represented in AZUL can also reflect the photographic studio set, where the stylist masters her craft.
Also, during a photo shoot, the only way to achieve an optimal result is through a balanced game of shadows and lights. In this sense, a photograph’s negative is essential for its positive outcome.
An aspect that helped me dig into these images was the presence of a mask and, consequently, the theme of anonymity. I thought this element referenced Maison Martin Margiela’s choice to cover the models’ faces to focus on the garments – a characteristic present since the brand’s first runway. In no time, I linked this element to Balenciaga: a brand that, since Demna Gvasalia’s creative direction, has taken a more conceptual route, drawing on Margiela’s work.

When glimpsed in AZUL’s big black surfaces, lycra garments hugging the body and structured shapes, my mind flew back to Balenciaga’s S/S RTW 2020: a show that combined the previously-quoted elements reinterpreted through the ’80s power dressing and everyday uniforms. Even if the brand aimed to mimic the colour of the EU flag, the catwalk and whole runway setting were immersed in a blue shade identical to the one used in AZUL.

After seeing Macarena’s shots for the first time, I remember thinking about the many uses of blue in art history. Think of Giotto’s lapis lazuli in the Arena Chapel in Padua: the colour would define a sacred space where the mortality of time was suspended. Its use created an atemporal space enlightened by God’s rays in which religious episodes were enshrined. In the case of AZUL, the background colour consecrates the studio’s space and transforms it into a place unaffected by time, where the magic of photography can happen. 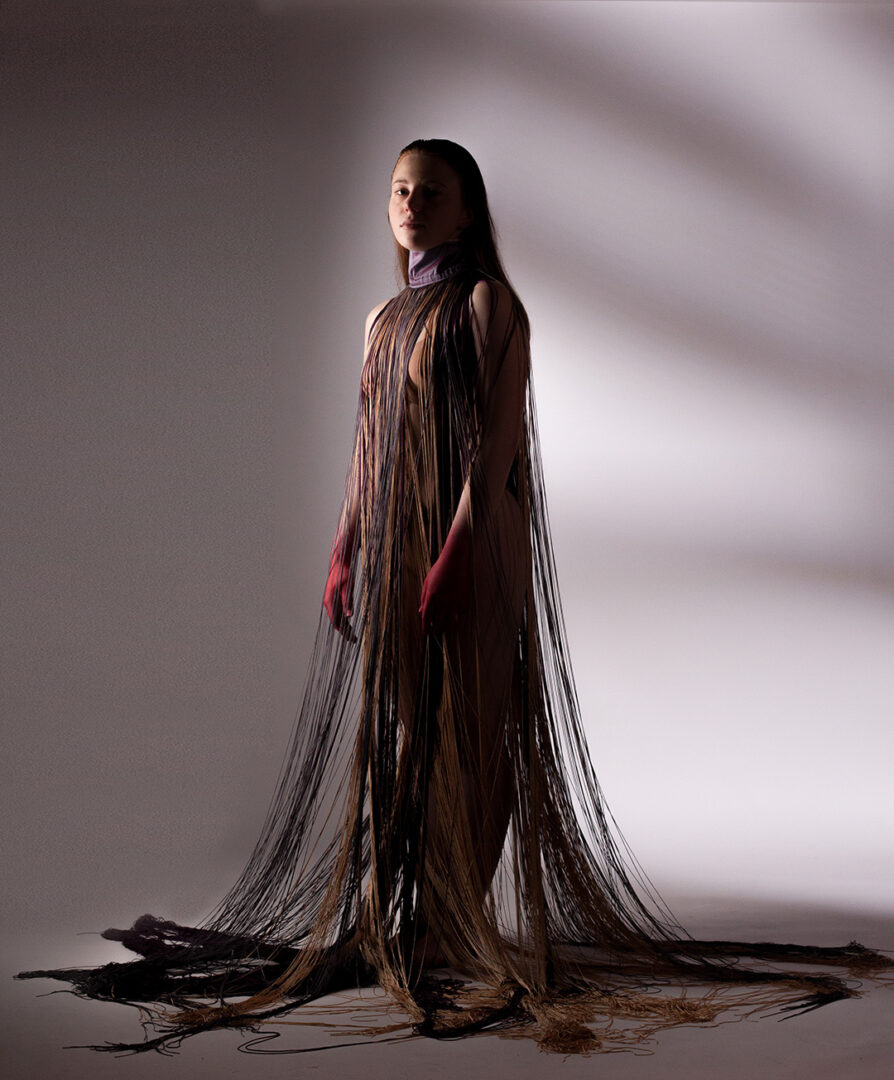 Some people can daydream. People can believe so much in some of their hopes that they turn them into ambitions. Every month, a new tool or strategy to visualise ideas used by students at Istituto Marangoni Firenze is selected and commented on by the editorial staff of I’M Firenze Digest.This month, we are presenting the Rebirth […] 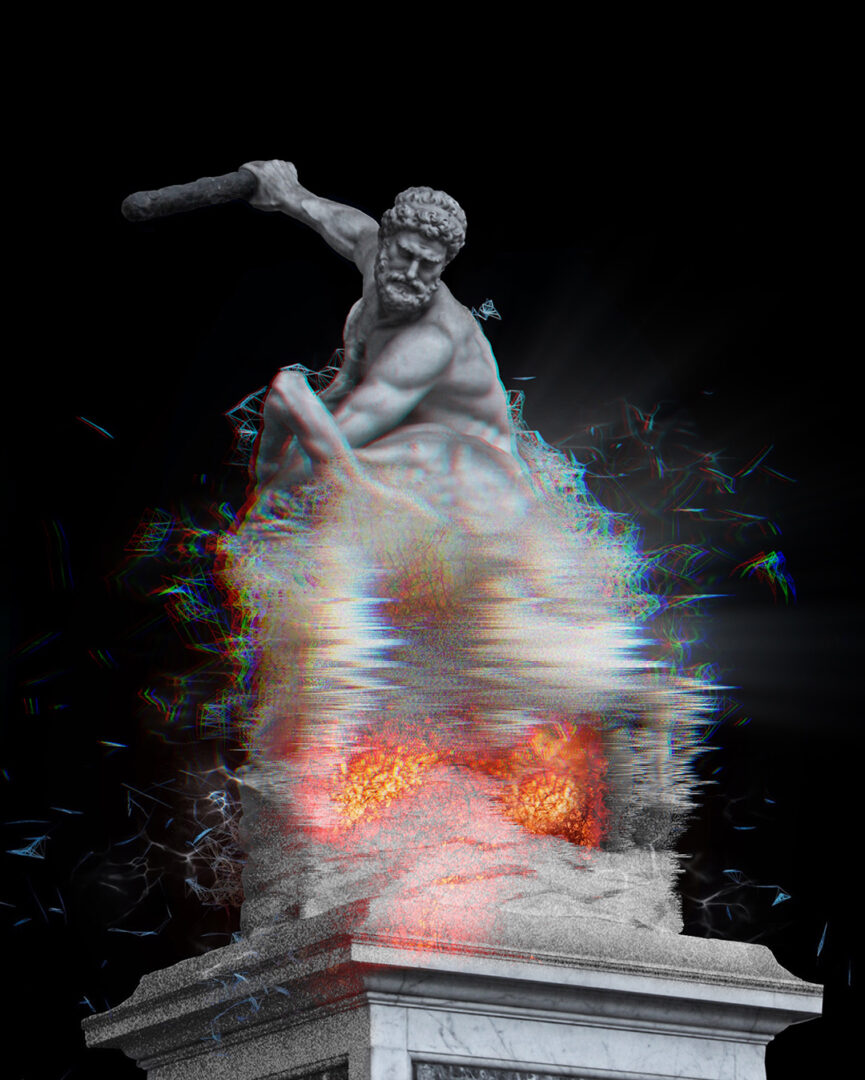 By mixing past and present, it’s possible to create an entirely new aesthetic full of hidden meanings.Every month, a new tool or strategy to visualise ideas used by students at Istituto Marangoni Firenze is selected and commented on by the editorial staff of I’M Firenze Digest.This month, we are presenting the artworks by Abraham Yael […]